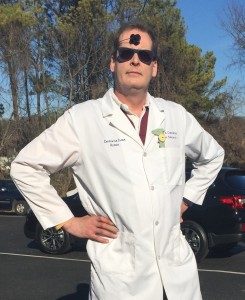 Mary Carpenter started to collect clocks that didn’t work and wanted to know how to fix them herself. So, she started to read articles about clock repair. She then joined the National Association of Watch and Clock Collectors and started to get to know other people in town that that fixed clocks. She started off working out of the basement of the house, then worked at Townsend Watch repair, and eventually opened Carpenter Clock Repair on Kingston Pike in 1978.

Mary’s son, Mike Carpenter, started apprenticing with her at the age of 14. Together, they restored historical clocks in the Knoxville area such as the Mabry-Hazen House clock, the Ramsey House clocks, and the Crescent Bend House clock.

Mike took over the shop in 1990 and expanded the business into sales and watch repair. He attended the American Watchmakers-Clockmakers Institute in Ohio and became a certified clockmaker.

He still cares for historical clocks in Knoxville, including the Knox County Courthouse tower clock. Over the past 35 years, Mike and his team have repaired over 16,800 clocks and watches.